In addition to his duties as PFD Chaplain, Father Richards currently serves as the Rector of the Christ Church of the Ascension in Paradise Valley, AZ.

Father Richards replaced our beloved Father Carl Carlozzi whom we sadly lost to cancer. Father Richards was Father Carl’s recommendation for his replacement. The two had a longstanding friendship and working relationship that without doubt, has positively impacted countless lives. Father Richards had the honor of presiding over Father Carlozzi’s funeral service.

Father Richards is a passionate preacher and teacher who moved from a Southern Baptist childhood to ministry in the Episcopal Church where he met Father Carl in 1997.

His undergraduate degree is a Bachelor of Creative Arts in Worship from Grand Canyon University. He earned his Master of Divinity degree from the Church Divinity School of the Pacific in 2003 after serving at St. James Episcopal Church in San Francisco as a worship leader and intern and at the Diocese of California. He also served as the Associate Coordinator of Young Adult Ministries and Church Development.

He returned to California after seminary to be ordained and served in both Tucson and Phoenix.

He left the Valley for seven years in Northern Michigan and returned three years ago. Father Richards reads voraciously, writes, and enjoys trail running. He lives in Phoenix with his wife Amy and their three children. 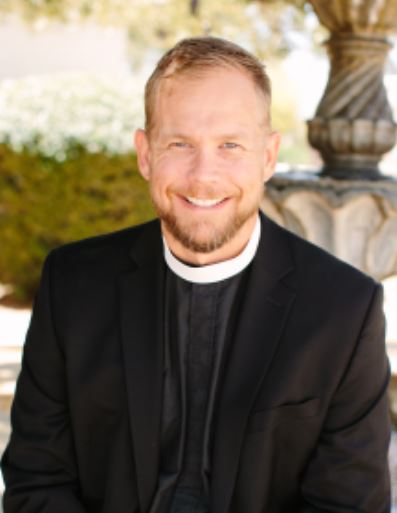